Indiana Jones with a socio-environmental consciousness

Ernst Aebi, both the man and his film, "Barefoot to Timbuktu," embodies the ideals of Mountainfilm in Telluride, this year May 28 – May 31. The annual gathering of a tribe, more evangelists really, is dedicated to saving the world one person, one place, one species, one story or idea at a time.

His emotional journey of hope, anticipation, and desire finally gets told in "Barefoot in Timbuktu," a documentary about a wild and crazy adventurer and his obsession with the Sahara desert and its people.

Aebi is Indiana Jones with a socio-environmental consciousness.

Telluride Inside and Out, May 24, 2010 - Article features audio interview with Susan Viebrock!

Aebi’s personality holds everything together, keeping us glued to the screen

At times, we scratch our heads in incredulous amazement about how his life has unfolded

Indeed, with his German accent, windblown appearance, wanderlust and obsession with impossible quests, Aebi often uncannily resembles that cinematic visionary/slavedriver Werner Herzog. One cannot but wonder what a Herzog docu on the subject of Aebi would look like.

Who's the coolest movie protagonist in town?

*** The most extensive interview with Ernst Aebi we've come across so far. If you're only going to read one single article from this page's selection, choose this one. ***

EA: You should never stop. As long as you go you can hope something new comes your way and makes life more exciting. You don't want stagnation.

EA: Actually, what our parents told us from an early age was that it was not allowed for us to say, "It can't be done." Nowadays our parents would be thrown into jail for the things they made us do or let us do.

A life-affirming celebration of compassion, hope, persistence and generosity of heart

Egi does a terrific job of bringing out Ernst’s warmth, wisdom, sense of humor, unadulterated charisma and kindness of heart throughout his many interviews.

if only everyone on this planet were as selfless, considerate, compassionate, productive and intelligent as him, perhaps we would be living in a much more sustainable world where everyone makes the most out of what they have

At a running time of only 84 minutes, Barefoot to Timbuktu manages to be captivating, inspirational and profoundly illuminating.

The movie as a whole is so cinematic, narratively and visually, in ways many viewers don’t instinctively attribute to documentaries.

Click on the preview images to see bigger scan JPGs: 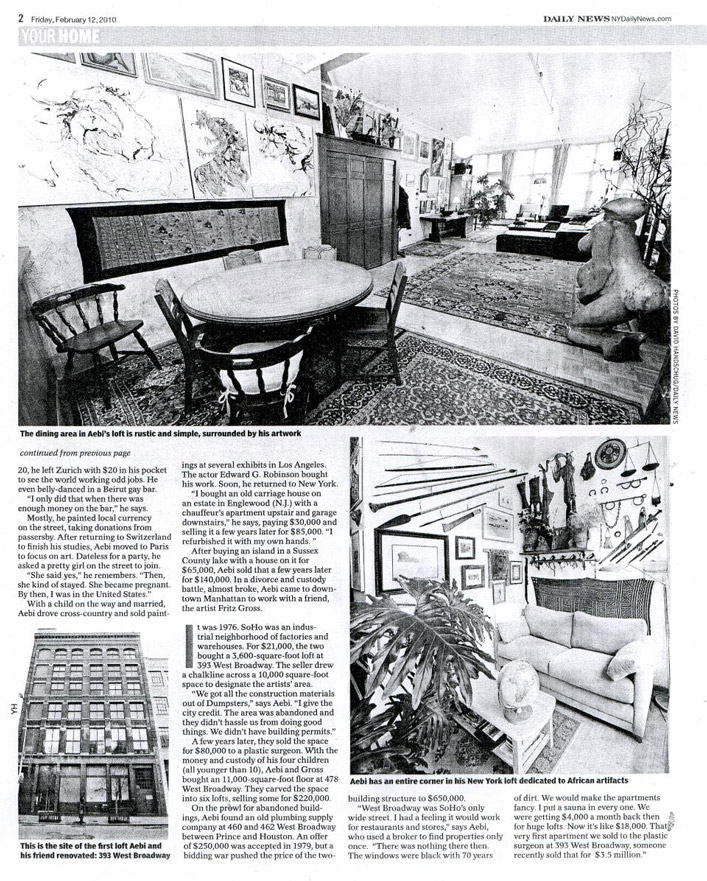 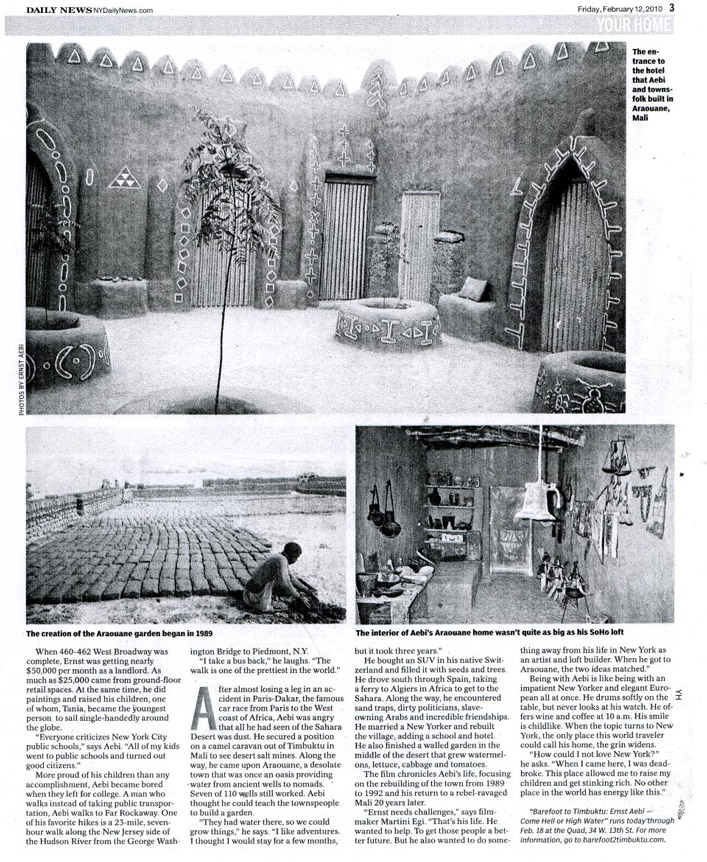 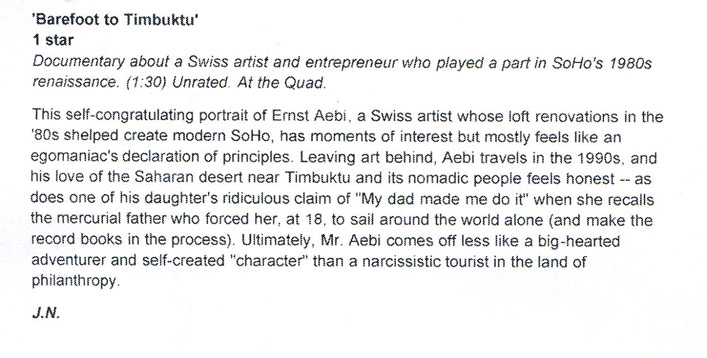 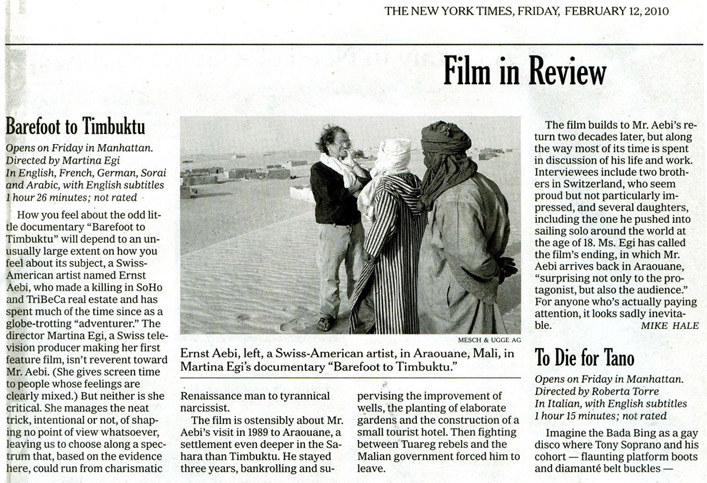 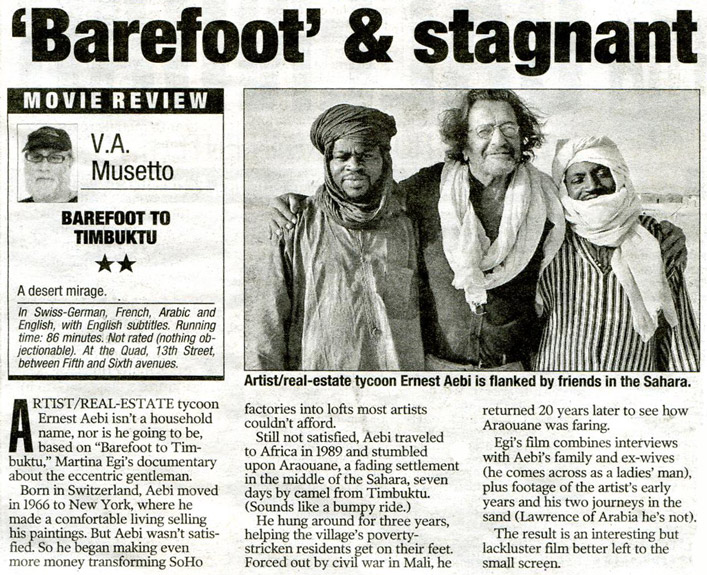 King of the sand castle

Director Martina Egi has crafted a portrait of a daring and dashing character who seems adverse to a sedentary life and thoroughly disinterested in boundaries or obstacles.

To call Aebi eccentric may indeed be the understatement of the century.

(...) inspiring to watch and Martina Egl has done a good job finding an inventively artistic way of telling his story.

Martina Egi Ventures into the Sahara

New York Magazine, February 15, 2010: Bilge Ebiri’s capsule review, and also one of the editor’s pick for the week.

Egi profiles Ernst with affection, but she doesn't shy away from examining the effects of his restless nature on his family and friends.

A deeply emotional voyage of hope and desire

A review by "New York in French", Audrey Conor

It’s a full-life well worth getting to know.

A film by Martina Egi 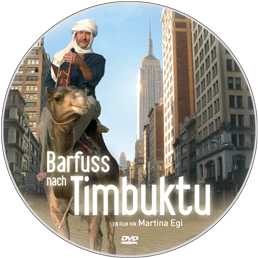